November – Indie Gift Along on Ravelry

Posted on November 19, 2019 by adriprints | Comments Off on November – Indie Gift Along on Ravelry 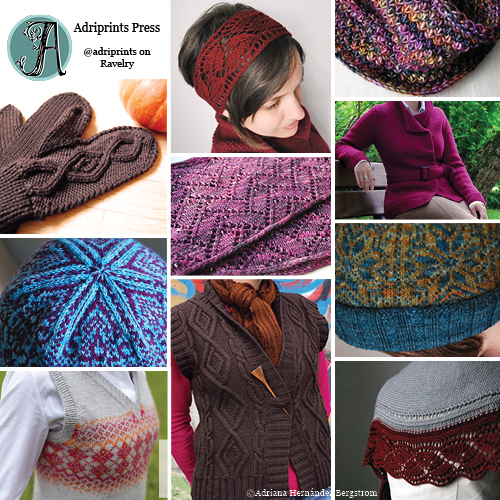 It's that time again!

Get your yarn wound and your knitting needles warmed up.
Indie Designers Gift-Along sale is happening next week!
More info here: https://www.ravelry.com/groups/indie-design-gift-a-long

Have a great November!

Comments Off on November – Indie Gift Along on Ravelry 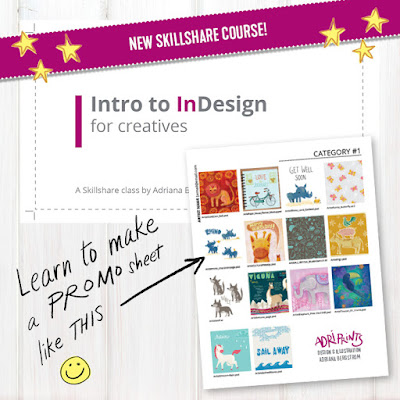 About My First Class on Skillshare

My first class is about learning to use Adobe InDesign (which already comes bundled with many Adobe CC accounts) to make beautiful, clean, perfectly aligned contact sheets that are easily edited, updated, and exported to help you sell your work.
I created this course to help de-mystify InDesign. A lot of creatives, artists, and photographers pay for Adobe CC, but are not sure how to take advantage of all the software it brings. So, this is my effort in making Adobe's publishing software work for you. InDesign is a really robust piece of software and the perfect companion for Illustrator and Photoshop when you're looking to put it all together and publish your work.

I created this course to help de-mystify InDesign.

I've used InDesign to produce all kinds of promotional and informational materials throughout the years: business cards, mailers, postcards, booklets, portfolios, and contact sheets.
I focused on contact sheets as a way to explore InDesign and learn concepts that will easily translate to a lot of other projects. If you'd like to learn more, you can check out the class here on Skillshare.
I'd love to hear what you think!! And, if you've never used Skillshare before, here's a link for a  free 2 month trial of their premium membership - the link's limited to the first 10 who use it though, but take advantage while you can!

Comments Off on My first online class!

The DIY Mojo is Back! 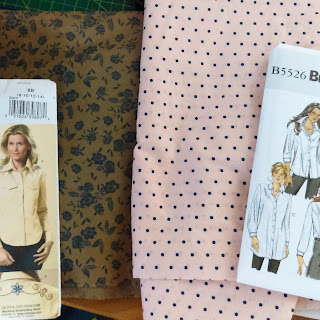 Watch out! I'm getting that itch to make clothes again! Bought a sewing pattern after receiving some lovely new fabric from a friend. Bought yarn for the first time in over a year, and am now putting together some new DIY projects.
Knitting:
Sadly our local LYS, the Loop & Leaf is closing, and Celeste the lovely owner of the shop had to sell all her yarn stock to prepare for the sale of the building. This meant steep cuts in price to the yarn and so I bought two small lots of yarn: 5 skeins of Juniper Moon Farm's Zooey and 7 skeins of Berroco Maya. We didn't have any stockists in Germany who carried Juniper Moon Farm or Berroco yarn so I was happy to finally get to try some of the more American brand yarns in warm-weather varieties. The Zooey is a cotton/linen blend and the Maya is a cotton/alpaca blend (chain structure).  I don't have too many warm weather yarns so it was perfect.


Sewing:
We took a short trip to Germany, and I was able to catch up with friends. One of my friends is going super-minimal-no-waste in her household so she foisted some beautiful fabric on me (see the first pic). It didn't take much to convince me to take it! I want to make a blouse and a skirt for work.
Quilting:
Finally, I finished both sides of the fun "blue-green" patchwork quilt I started last year. So now all that's left is the actual quilting! 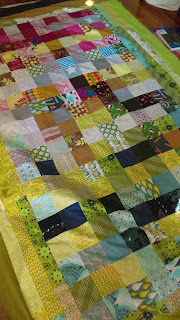 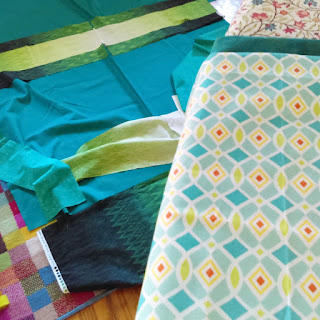 And that's what's happening in my craft-room (which is also the living room and art studio and general multi-purpose room)!

Comments Off on The DIY Mojo is Back!

Tie Dyeing for the New Baby

Posted on July 7, 2016 by Marla | Comments Off on Tie Dyeing for the New Baby

I haven’t made too many things exclusively for this new baby. I still have so much leftover from Felix, that we’re not lacking for much. Still, this new little one will be a person all their own, so a few thing just for him or her seems appropriate.

This past weekend was chilly and drizzly, which is strange for Kansas in July, and I got a Tulip tie dye kit on sale at Michael’s, so I enlisted my 10 year-old’s help in tie dyeing a few things for the new baby. Not only did we get to spend some quality time together, it helped get him invested a little bit in the prep for the new baby. He’s not exactly enthused about having another new sibling at the moment, but this was fun for both of us.

We started with three yards of osnaburg done in the classic spiral technique. It came out perfect! I’ll be making another ring sling out of this as soon as my rings come in.

When I was going through our baby clothes a couple of weeks ago, I found more than 10 plain white onesies. While I’m all for the practicality of a neutral onesie, I’m not typically known for dressing my babies practically or along gender lines, so we had a lot of fun tie dyeing some onesies in all colors.

This guy was created by rolling from top to bottom and using two rubber bands to divide it into three sections. Then Athrun absolutely saturated it in dye. I love it!

We dyed everything dry, and this guy was the only one that kind of repelled the dye. It’s a Disney brand organic cotton onesie, and I don’t think Felix ever wore it, so there’s the chance that it had never been washed. I’m not entirely sure, but I love how the dye came out anyway. This was accordian folded then sectioned into four, dyed alternately with lime and kelly greens.

As a contrast the the Disney onsie, this Gerber one was dyed using the same technique (just a different orientation) and really soaked up the dye!

We used the bullseyes technique on this one, and the colors are so much fun.

Included in the kit was a sheet of plastic to protect your work surface, which worked great, but we were left a bunch of dye drips all over the plastic when we were done. (The instructions say to cover the plastic with paper towels to soak up drips, but we don’t use paper towels, so we improvised.) I used one last onesie to soak up the dye. Way better than paper towels. Baby will look like they helped dye their own wardrobe.

And just for fun, when I went to edit photos for this post, I had a large amount that accidentally looked like this:

At 35 weeks, the belly is getting in the way of everything.

Comments Off on Tie Dyeing for the New Baby

Posted on June 30, 2016 by Stone View | Comments Off on Laminate Flooring For Stairs

Comments Off on Laminate Flooring For Stairs

Posted on June 26, 2016 by Stone View | Comments Off on Hardwood Floor Adhesive

Comments Off on Hardwood Floor Adhesive

Posted on June 21, 2016 by The Floor | Comments Off on Best Underlayment For Hardwood Floors

Comments Off on Best Underlayment For Hardwood Floors

Posted on May 26, 2016 by Marla | Comments Off on Refreshing Peppermint Sugar Scrub

Most of the year, I am a lavender kind of girl. I love the smooth, relaxing, floral scent, but when the weather turns hot and muggy, and I spend a lot of time outside getting dirty in the garden, at the end of the day I really only want one thing: cooling, refreshing peppermint. Peppermint soap is delicious, but after a long day of working in the sun, nothing is more luxurious than a peppermint sugar scrub.

I love sugar scrub. I use the recipe I’m sharing today on my face daily. It’s also perfect to rub into your hands and forearms if you type or knit a lot, or, you know, constantly.

My go to carrier oil for sugar scrubs is coconut. It’s easy to work with and not too heavy to use as a facial cleanser, while still being an effective moisturizer. I like to use a fine-granule sugar in my face scrubs. Regular old table sugar is just about perfect.

This recipe fills one of my 4 oz metal tins, but a good rule of thumb is to use twice as much sugar as coconut oil to fill whatever container you think is pretty or practical. A container with a lid is best to keep water out of your scrub, and you should always store your scrub outside your shower.

Stir together in small mixing bowl, then transfer to tin

To Use: wet skin, scrub into skin, rinse, pat dry.

Don’t want to make it? This product will be available for purchase form Tiny Dino Soapworks soon!

Posted on May 11, 2016 by Adri H. | Comments Off on Pre-Surtex Sneak Peek
May Flowers bring Spring...
& Surtex!
I cannot believe it's May and time for Surtex!!
It's heeere!!
I've been prepping all year long for this surface design and textiles industry trade show, and it feels a little unreal that it's only a few days away.
May flowers are an appropriate metaphor I think. I've been planting seeds since last year, and now is when they are starting to bloom...
My seeds (preparations) included creating over 180 images, making booth banners, promo bookmarks, promo books, fabric swatches, greeting cards, brochures, and sewing some hand-printed zip pouches! My fellow members of Finch & Foxglove, my art collective, have also been prepping their hearts out in order to make our collective's Surtex debut a success! 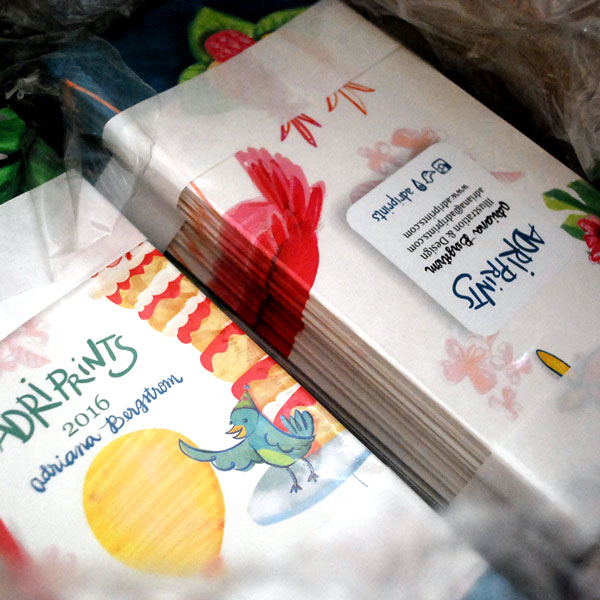 This is a general overview of the items I'll be bringing with me to exhibit at my debut Surtex, and I will be doing a post-Surtex review once all is said and done. I'm excited to figure out what works (as well as what doesn't)!
Wish me luck!!
And, if you're going to be at Surtex in NYC this Sunday to Tuesday, you can find me and my work at Finch & Foxglove's booth #543.  Can't wait to meet you!
Wishing you a wonderful week!
P.S. Let me know ahead of time if you'd like to meet up with me so I can be sure to be at the booth - we're taking shifts since we're 8 artists in a 10x20' booth.

Comments Off on Pre-Surtex Sneak Peek

I've got another fun illustration for you all!  This one is a really nice cornbread recipe I made last Thanksgiving.  I was pleased with the results and will be making it again. Next time, for added texture, I might add canned or fresh cooked corn to it for a bit more added texture and cut a bit of the liquid.

Either way process was interesting for this one.  I started back in November with a little sketch I did by the recipe itself... and finally got the time to finish it!

Comments Off on Cornbread Recipe