With A Little Help From My Friends

Posted on March 4, 2010 by Susan | Comments Off on With A Little Help From My Friends
that's how I get by. And this week, the comments here; in eMail and phone and PMs and snail mail have just surrounded me with comfort. I hope you don't mind that I think of y'all as a big smooshy blanket because that's what it's felt like. I've read the comments here over and over. ~~waves to Paul and Crystal! I haven't heard from y'all in forever. Hope all is well with you.

I feel better but damn it..I hate it when I just stumble into something that brings reality back. Like opening the door slowly because Zoey can't back up fast. Or cooking more than I eat so she can have a little taste. Or wandering around with my left over cereal milk looking for Mary...she loved that sweetened milk.

I sniffed and snuffled and sobbed and sniffed and snuffled some more and then decided that was enough. So, when in doubt...do laundry. Stripped all the bedding including mattress pads etc. Washed all fo them. Washed winter covers. Washed spring covers (the didn't need it since they'd been in bags but hey...it's more laundry) And then decided that next I needed to steam clean the carpets. So right now, I can actually get to two chairs although it involves some contortions as most all of the furniture is piled in one room and all the lamps, baskets of knitting etc is piled in another while my bedroom and living room floors dry. Thankfully it's a breezy warm day so hopefully by nightfall they'll be dry. And maybe tomorrow, I can umm wash curtains??

but again, thank you so much. I've never ever in my whole entire life been the recipient of this much caring.

Comments Off on With A Little Help From My Friends

On a wave of love, a Funeral and a Wedding

Posted on March 3, 2010 by Jane | Comments Off on On a wave of love, a Funeral and a Wedding
I feel like a cliche right now, feeling a wave of love that is so powerful I can't contain it. And the reasons are very sad and very beautiful all at once.

I spoke to a dear friend yesterday whose husband has been battling (really too small a world in his case) serious illness (3 kinds of cancer) for more than 15 years. We don't talk often enough, but I had been dreaming about her. She asked for news of my kids, which I was happy to provide. And then she confirmed my hunch, that her dear Stephen had died in August. It was a beautiful death as these things go. He had been more sick than usual for months, but rallied enough to go with the family on vacation. This time they splurged, renting a place overlooking the water. They settled in, walked on the beach, and he died peacefully in his sleep.

Even after years of illness, it is shocking. Despite my intuition that this might have happened, I am shocked, too. But this is a family so filled with love and creativity and positive energy, they had fit more into a too-short marriage and time with the children than many do in a long life. And Stephen didn't die in a hospital with tubes or unconscious for weeks or suffering as he made his exit. He died with dignity, and Love. I am filled with sorrow about his loss, but oddly also with the wave of love that people can create.

My strongest memory of Stephen is the "Stephen Our Hero" story. After attending my mother-in-law's funeral several years ago we were driving home on a Sunday when the fan belt on our car broke. We pulled off the road, into a gas station that did no repairs until Monday morning. Neither did any of the other places we called. Stranded. And then I remembered my nearby friends who I hadn't seen in way too long. Worth a try, we said, and called. Stephen dropped everything and came to our rescue, making sure we were fed, taking my spouse and kids to the train so they could get home for school and work the next day, and taking me to their home until the car could be fixed. He was so kind and sweet and talked us down from "broken fan belt panic." Our Hero! And I had a chance to catch up with the family that night, which was a great blessing.

I still have the broken fan belt, meaning to make it into a piece of art. It is dirty and (obviously) broken, but I feel Stephen's warm heart every time I look at it.

The wave of love continues, because today, March 3, 1010 gay couples who wish to get married in the District of Columbia can do so! My neighbor Andy is one of my heroes in this, since he led the legal fight to resist challenges to the law from groups largely outside DC to stop it going into effect. I am so happy about this both from a human rights perspective and from my sentimental heart, which just loves weddings.

And today I was asked by a couple who stood in line at 4:30 am to get the fifth license issued to perform their marriage. (I am an Interfaith Minister and help couples create the exact wedding they want.) I have known them for years, and know of the love and commitment they share. This just makes me so happy I am grinning from ear to ear.

Today I am riding a wave of love, with rainbows.

Comments Off on On a wave of love, a Funeral and a Wedding

Posted on March 1, 2010 by Susan | Comments Off on Good Riddance February 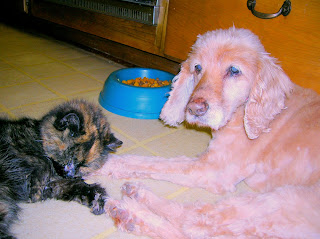 It's been a cruel month.

On the 15th, Mary, my 21 1/2 year old matriarch kitty headed off to the Rainbow Bridge cradled in my arms. I believe she had a stroke several months ago, but had recovered enough to continue to boss everyone in the house. However, on Saturday the 12th she had what was apparently another one and her downhill slide picked up steam.

And last night, Zoey the wonder dog (age guestimate is 12 she was a rescue), also took the journey as I sang (for the eleventy seventh time), Oh Canada to her. I sing to my babies a lot..mostly nonsense songs...but yesterday Oh Canada was the only one I could sing without sobbing. She was on new meds for an infection and her arthritis and as of Thursday and Friday doing sooooooooo much better. We'd planned on a Saturday afternoon outside enjoying the high 50s temps. But before we could do it she had a massive seizure which indicated a stroke. Certainly her newly regained agility went to hell and she was absolutely frantic. Fortunately she calmed down, ate a good supper, stayed up past her normal bedtime wagging her tail. Awakened me at 0300, restless and the day went downhill from there. We spent most of the day on the floor. Her on a pallet of blankets and me on the loveseat cushion and various pillows.

This picture makes me cry..not because they look sweet but because it was so funny at the time. As Zoey's arthritis took hold, she had a whole lot of trouble with her back hips and her legs would go out from under her on slick floors. I'm not sure if Mary thought she was helping, but she almost seemed to stalk her. And as soon as Zoey went down, Mary would go snuggle up to her. Zoey was NOT thrilled. And would bark and whine as if to say, "She's touching me mom!! Help" And this one time the camera was on and I got a quick flash-lit snap of them. (I took it to Picnik and got Zoey's eyes back to the dark brown they were but for some reason, in there Mary was so dark to be unrecognizable)

"If tears could build a stairway,
And memories a lane,
I would walk right up to heaven
And bring you back again"

I miss you guys so much. Thank the universe that you found your way into my life. xoxoxoxo

Comments Off on Good Riddance February