Posted on June 12, 2020 by mvobsession | Comments Off on Rag Tag Daily Prompt: Uncle…

Never had the right challenge to use my favorite picture of my Uncle Steve for, until today. This picture describes him perfectly, a bit of a comic and a mischief maker. All kids loved him because he was pretty much always one himself.

Honoring My Great-Grandfather On This Memorial Day 2019…

Posted on May 26, 2019 by mvobsession | Comments Off on Honoring My Great-Grandfather On This Memorial Day 2019… 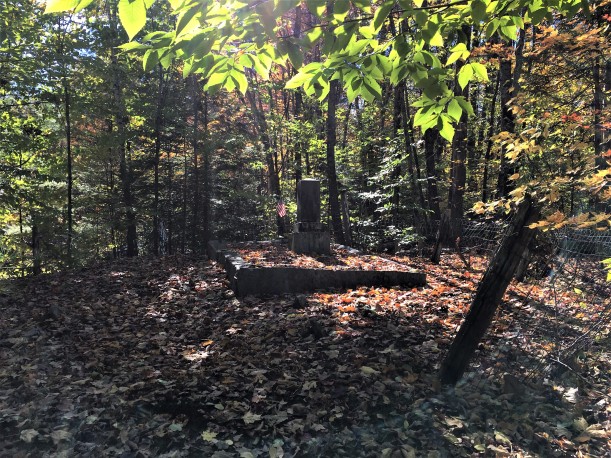 My great grandfather Joseph P Littlefield was injured in the Civil War. He was a member of Co. C, 9th Maine Regiment. He was wounded at the battle of Cold Harbor in Virginia and sent home to Maine to die. He died on Sep 3, 1864 of his massive injuries but also of typhoidal pneumonia. His wife and the 3 oldest of his 8 children died within months of him from it as well leaving my grandfather Charles G Littlefield at age 9 the oldest of the five remaining children. A tragic story and once we learned about it felt compelled to find their graves and honor them. Their small plot is off the beaten track in Rome, Maine we found it and traipsed through the brush to get to it. Worth the trip indeed.  This was very emotional in that Joseph, Martha Jane, Margaret, Adison and Atwood have become very real to us and we feel very close to them.  We weren’t able to bring them flowers but left 5 pennies to indicate we were there and remembering them. 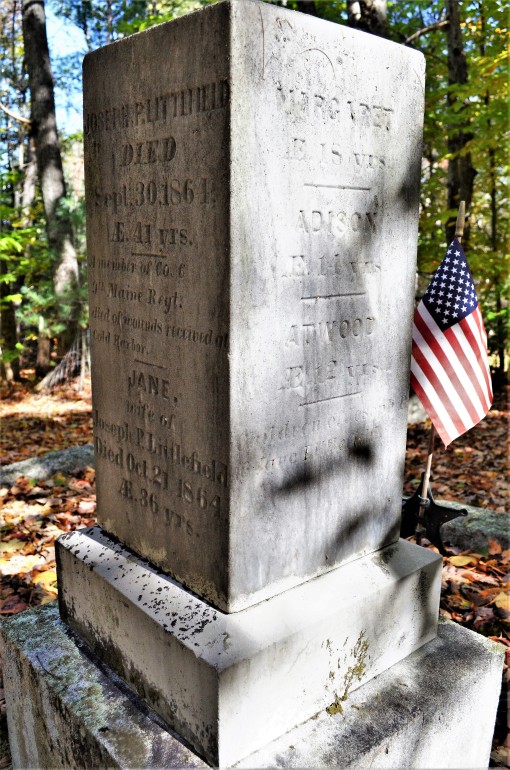 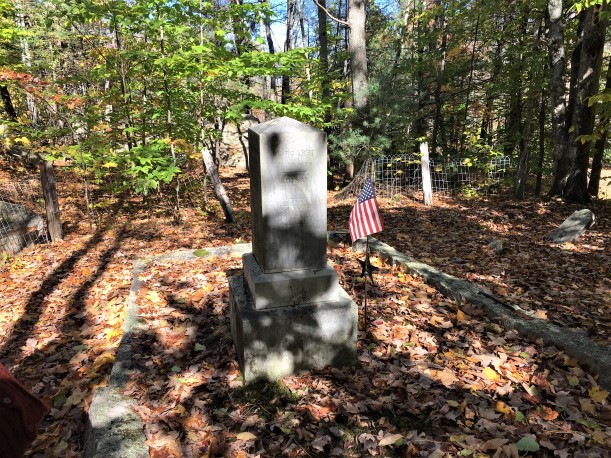 Take a moment to remember the original reason for Memorial Day and the men and women who fought for, and gave their lives for our country.

Posted on February 28, 2019 by mvobsession | Comments Off on Chappaquiddick Lullaby Revisited…

I think one of the nicest children’s books about MV is “Chappaquiddick Lullaby – a song of Martha’s Vineyard” written in 2006 by Stacy Elizabeth Hall and illustrated by Judith Pfeiffer.

The book also includes a CD by Kate Taylor and Taylor Brown.

The book is basically about the activities and daydreams that children have during the summer. The illustrations are abundant with Island landmarks and places… you need to read the book several times before you’ve picked out everything included in this rich and lovely book.

One of the things that drew us to this book is that we had our own Chappaquiddick in the family, a Boykin spaniel we called Chappy,  and when we found out that there was a Chappy song, sung no less by Kate Taylor who we, and Chappy, have had the pleasure of meeting, we had to have the book,  which was autographed to my daughter Deb and her Chappy by the author Stacy Hall and her dog, Cala

(Chappy passed away a few years ago but these precious memories linger on and I’m always happy to share them).

“The Legend of Katama” is a beautifully told story of Katama, a brave young Wampanoag woman and how she changed her world.

Comments Off on Chappaquiddick Lullaby Revisited…

Heading to New Jersey over the George Washington Bridge at sunset… (does anyone else see 2 eyes and a mouth at the top of the bridge?)

August –My Great-Uncle, Louis A Young … The Incredible Man With No Hands…click here)

Comments Off on Favorite Posts of 2018…

Posted on December 25, 2018 by mvobsession | Comments Off on The Sisters First Christmas…

The sisters first Christmas, 52 years ago.

Patty was almost 2 1/2 when Debbie was born.   Deb, who was due the end of December arrived 7 weeks early and didn’t come home from the hospital until Dec 21, the first day of winter, 1966.

As you can see from the picture Patty was delighted and happy to be a big sister.  Debbie, I’m sure was happy to finally be home.

Patty was a terrific big sister right from the beginning.  She helped me take care of Debbie and when I would give Deb her bottle Patty and her new dolly would join us.   Her doll was almost the same size as Deb, Debbie had been only 3 lbs when she was born and had to be 5 lbs before she could come home… so yes, she and the doll were almost the same size.

Since it was so close to Christmas when Deb came home I wanted her to be a surprise to her grandparents when they arrived on Christmas morning.   Patty was under instructions from Santa Claus not to tell anyone that her new sister was home, and since the request was coming from the big guy himself she didn’t utter a word to anyone.

However…   my mother called one evening and just at that moment Debbie, who was in the same room with me, began to cry.  Oh oh.   My mother asked if that was a baby and I said no.  She said she didn’t believe me.  She asked again… ‘is that baby home from the hospital?’   I said yes but that I had wanted to keep her a surprise until Christmas.   My mother kept her composure but I could hear the crack in her voice when said how happy she was but that we shouldn’t tell my father… let him be surprised on Christmas morning.

So Christmas morning arrived, along with a 24 hour stomach bug which hit me pretty hard. I managed to get out of bed long enough to greet my parents at the door. Patty was all bubbly and happy to see her grandparents and they were showering her with plenty of attention.

Then my dad glanced at the tree.   He looked closer.  I could see his eyes moisten when he realized that the baby in the baby carrier under the tree was NOT a doll but his new granddaughter Debbie.    My dad wasn’t one to let his emotions out or show on his face… but he did that morning.

It was definitely a very merry, happy and blessed Christmas that year.

Christmas morning 6 years later in 1972, my favorite Christmas picture of Patty and Debbie… 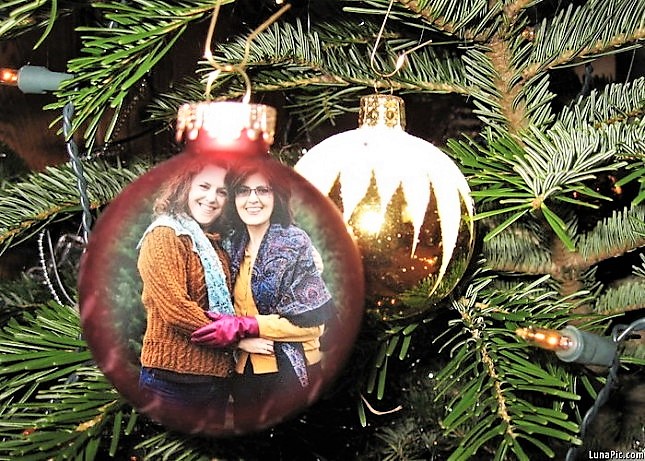 Merry Christmas everyone and especially to my girls

Comments Off on The Sisters First Christmas…

Posted on December 5, 2018 by mvobsession | Comments Off on Christmas Boxes…

T’was Christmas morning and all through the house,

Everyone was stirring, even the mouse,

Lots of smiles, joy and merriment,

And of course a new ornament.

Patty opened her box and Deb’s turn was next,

The look on her face was very perplexed !

The box was empty, no ornament inside…

I felt terrible and almost cried.

Deb rose to her feet and headed to the tree,

And hung the empty box where the ornament should be.

The following year I searched all around,

A perfect ornament for Deb must be found,

It was, it was just meant to be,

A box ornament for our Christmas tree.

We hang them each year and remember with glee,

How an empty box (filled with love) came to decorate

Comments Off on Christmas Boxes…

Posted on November 29, 2018 by mvobsession | Comments Off on Our Santa… 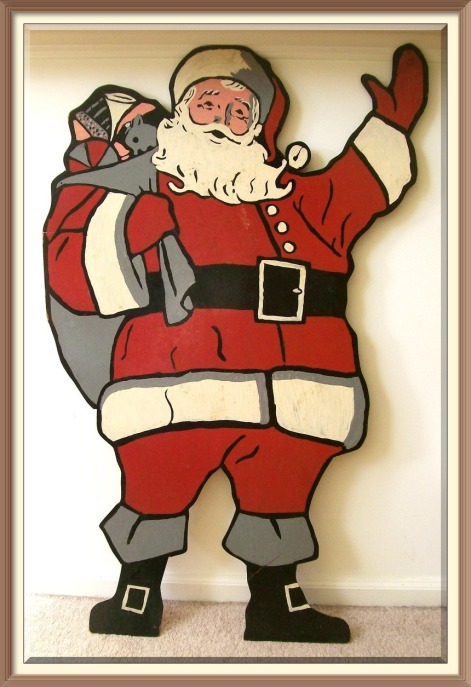 My dad was a police officer in Newark, NJ. For many of his years on the force he worked in the Emergency Squad division. During the long hours between calls the guys would keep themselves busy in various ways like cooking. Near the Christmas holidays they always came up with a special project, like candle making for instance.

In 1956 they made Santas.  I still have ours.  Santa stands about 3 and 1/2 feet tall and is made from press board. After the outline was drawn the guys cut out the Santas and my dad set to work drawing the features, clothing and bag of toys.  At that point our Santa came home and my mother and I painted him.  I’m not sure how many coats of paint we used but Santa was spread out on our kitchen table for about a week before he was completely dry.  I don’t know what kind of paint we used either but here it is 59 years later and he’s not chipped or faded.  This was the only time I ever remember the three of us doing a family project together.

I love everything about this Santa, even the buttons being on the wrong side… but the thing I love the most is that he looks like my dad… a self portrait so to speak.

Comments Off on Our Santa…

Christmas Songs For Me…

Posted on November 26, 2018 by mvobsession | Comments Off on Christmas Songs For Me…

Pretty much everyone loves Christmas music and has a favorite song, or three, or twelve.  I love the classic carols like “O Holy Night” and  the standards like “White Christmas”.  However, there’s one song that makes me smile and bop around the house, or drum on the steering wheel of the car,  and that’s Mariah Carey’s “All I Want For Christmas Is You.”.  I can never hear it enough times.

Knowing this, my daughter Deb made me a special CD which she gave me a couple of years ago.  Out of 21 songs “All I Want For Christmas” is on it SEVEN times.  At first I thought it was going to be every song, and Deb said she did think about doing that, but that would have been silly.  She did a terrific job of choosing interesting songs and I’m enjoying them but I have to say I like numbers 1-4-9-11-15-18 and 21 the best.

Comments Off on Christmas Songs For Me…

Another year of thankfulness. For My Family. My Friends. My Health. The blessings I’ve received and the unknown ones on their way.

Wishing everyone a Happy Thanksgiving

Comments Off on Thanksgiving 2018…

Posted on October 31, 2018 by mvobsession | Comments Off on Unexplained …

I repost this post often as it touches me deeply.

My daughter Deb is a twin. Sadly her sister Susan was only here for a few hours.

One of my favorite pictures of Debbie (age 3)

Katy (Katama) was Deb’s first Boykin Spaniel. She was the first dog to go on vacation with Deb and me, no big surprise that it was to MV. Katy left us after 20 months and we feel that she’s now with Susan. Here’s Deb with Katy at Sengekontacket Pond on Martha’s Vineyard.

Chappy (Chappaquiddick) was Deb’s next Boykin Spaniel. Here they are enjoying the window seat at the inn we were staying at in Oak Bluffs.

We took lots of pictures of Chappy’s first trip to the Vineyard, especially on the beach and in the water. He really enjoyed splashing about and barking at waves. These pictures show a little of his fun at the beach.

And then there’s this picture…

Is this a double exposure, or is it Deb and Chappy with Susan and Katy ? You be the judge.  Just let me say that my camera, not a digital one, had never, until that day, taken a double exposure and never did so afterwards.

Comments Off on Unexplained …