Posted on July 31, 2012 by StephCat | Comments Off on Woolen Rabbit Opal Winner!

Posted on July 31, 2012 by Caroline | Comments Off on Special Projects Week

Where Zac and I went to high school, there was a special week-and-a-half-long period of time sandwiched between two regular terms that was especially set aside for students to pursue something outside their usual fields of study. Because it didn’t take place during a regular term, you could devote all your time to creating some magnum opus, or to the intense study of one particular subject, or to the exploration of some place or development of some skill you’d never thought about before. We called it Mini-term, but I think at other schools I’ve heard it called Special Projects Week.

That’s definitely what this past week has felt like to me. As soon as August starts, we’ll be back to our usual farm stays (and camps!), but, right now, we’ve all plunged headfirst in to our own particular projects.

For example, I’m getting a jump on the fall garden:

(In a cruel twist of fate, the seeds I’m starting right now are cool-season crops, and need temperatures below 70F to germinate, which means I can’t use the greenhouse for these guys. But soon I will!)

Zac and Susan are collaborating on a culinary project that I’m duty-bound to not reveal– but I can say that you all are going to love it. I love these pictures of Zac getting the perfect charred-and-still-smoking photo (to be fair, he uses the culinary blowtorch more than anybody I’ve ever heard of– this is pretty par for the course).

Of course, there’s also a bit of time for real, live relaxation: reading on the front porch with a cold drink and a good book.

Do you all try and designate a time to recharge your creative batteries? Do you ever break out of the routine by immersing yourselves in something completely new? What do you do? (and, practically speaking: How do you carve out the time?)

Comments Off on Special Projects Week 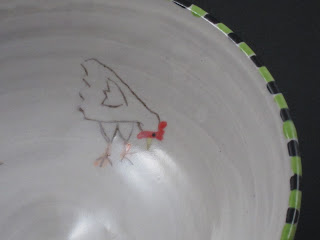 Well.  Not a human friend but the electronic kind.  The kilns at LibertyTown are down with the kiln flu.  Hopefully help is in the near future.  All my new face yarn bowls are in there just waiting to be finished!

In good news we got the first of what I imagine will be many estimates for The House Project.  It appears rehabbing all the windows is totally doable....but the studio came in a little high.  Fingers crossed that we can come up with some compromises!

Meanwhile I have not quite kept to my goal of 2 new pots a day on Etsy....but at least I've managed a few each weekend!

Comments Off on A Sick Friend.

Posted on July 31, 2012 by librarysarie | Comments Off on BOOK REVIEW: The Real Elizabeth
The Real Elizabeth: An Intimate Portrait of Queen Elizabeth II by Andrew Marr My rating: 4 of 5 stars Everyone's got their celebrity obsession, and I've confessed before that mine is the British royal family. On top of that, I'm...

Comments Off on BOOK REVIEW: The Real Elizabeth

Posted on July 30, 2012 by Marla | Comments Off on Pseudo-Ravellenic Knitting

I know to really participate in the Ravellenic games, one is meant to join a team and sign up for a competition, etc., etc. I still wanted to give myself a knitting challenge, and I am taking this challenge just as seriously as though who signed up officially, but the truth is that internet forums have been leaving a bad taste in my mouth lately. Yes, even on Ravelry, and it makes me sad. So, this Olympics, I am avoiding the forums part of the knitting games and just doing it on my own.

I chose Anne Hanson’s Motheye as my project. I have really knit a lace scarf, and I have yet to successfully complete a project out of lace weight yarn. So, I threw my balled-up yarn from my ripped out Starling, which I will finish one day when I have the patience to dye the yarn first, in a pot full of red dye.

This is the effect it’s having on the pattern.

This was just a little ball of yarn, a little snag in the ripping out I couldn’t untangle, and the white shouldn’t last much longer before it runs out. Even now, I can feel myself growing bored with the undyed yarn, and am thinking of switching to the bigger ball. The big ball should have a much larger red section, and therefore a longer transition. We’ll see how it goes. However, I am still enamored of my Pearl Street Pullover out of undyed yarn. Perhaps it is the cables rather than the color?

I do love the nupps! Nupps are another thing I have never knit. I like them and am dreaming of pairing them with cables sometime in the near future. Or do they become baubles when the are with cables. Is there a difference?

There is much I still have to learn about knitting. More on that later.

The suspense, it should be driving you mad.

Comments Off on Pseudo-Ravellenic Knitting

Comments Off on Block of the Month: July, Dresden Plates

Sunflowers By The Sea …

Posted on July 30, 2012 by mvobsession | Comments Off on Sunflowers By The Sea …

Comments Off on Sunflowers By The Sea …

Scenes from the farm Comments Off on Scenes from the farm

Sheep of the Week: Draco

In anticipation of the autumn, I’m going to introduce you all to our Border Leicester ram lamb, Draco. He was born this past spring at the same farm we’ve bought our other Border Leicesters from– but, importantly, he’s from a different bloodline.

Since he came to the farm not just as a lamb, but as a ram lamb, he was in for a particularly lonely adjustment period. The two new ewe lambs he came with, Sagitta and Boöetes, got to have one another for company in the girls’ pasture, while Draco had to fit in to the boy flock all by himself.

He’s done an admirable job finding his place, and he’s such a darling, self-assured little cutie (not a cutie for long, though, as we’ll see) that I always try and keep an eye out especially for him in the pasture.

Yesterday evening, though, I was doing some work in the garden when I noticed he was butting heads with some of the yearling wethers. He’d butt heads with Emu for a while, and then they’d both walk away. Then he’d butt heads a couple of times with Callum, and they’d both go about their grazing. He’s less than 7 months old, and yet he’s starting to feel his oats and pick some fights with sheep who’re more than twice his age!

Can it be? I wrote the other day about how quickly the lambs seemed to be growing up, but Draco’s already, somehow, feeling the autumn coming on.

Comments Off on Sheep of the Week: Draco

Tagged Features, lambs, posted by Caroline, Sheep of the Week

Can't seem to get enough of one sort of thing done around here to have a post that makes sense, so here's everything I guess.

That was my first "pesto garden" harvest a while back. My Memmy gave me a still-in-the-box food processor that she never used (her old one is still kickin' and then somebody gave her this one for whatever reason and it just sat around). Anyway, what? Oh yeah. I chopped up those piles of goodness and smooshed them into a little bitty container and stuck them in the freezer.

And now I'm ready to do it all over again.

I just wish my 'maters were as fruitful (literally).

They got nice and big, but are just now really blossoming and I've had very little fruit so far.

Ah well. At least we've been finally getting a little rain here and there.

Our area was/is not in drought, but it still had been so dry for so long.

Even though we are not allowed to keep chickens in our borough (and honestly? I don't have the energy or money for them at this point in my life anyway), we have plenty of local sources for fresh eggs, and my neighbor Linda surprised me with a dozen the other week. Of course, we had already devoured half of them before I managed to get a picture.

I finally picked a paint color and put a better back on it:

Hooray! Now I love it again!

And speaking of loving things again... The mystery shawl from my last post? It got weird.

It's hard to explain -- no wait, let me rephrase this. It's actually very easy to explain, and at some length too, but I will not bore you. Basically, the design of the shawl in the second clue proved to be something that I feel does not benefit from a self striping yarn and is much better served by a solid, tweed, or very slightly variegated yarn instead.

Luckily, I had these already on hand.

The brown and tan is undyed alpaca from Ideuma Creek (the ball's worth was purchased at Rhinebeck and the two cakes were purchased online much later), and the white is Juniper Moon Farm cormo that I grabbed on sale a few months back. They are both so soft! And knitting up beautifully together.

Because the pattern name is "Rockefeller" and my yarns are now alpaca and wool, I have dubbed mine, "Wool-paca-feller." ... Isn't it sad that I amuse myself so.

A few years ago, my friend gave me the Little Miss figurine on the far left for no particular reason except that she was cute. After a while, I got the bright idea to affix her to my dashboard with a little adhesive square; sort of a fun little mascot for our trips. Fast forward a bit and the same friend sent me the pipe smoking bobble headed Pappy in the center, so I stuck him up there too, joking that the little figures were Mr. Ambry and me. This fabulous idea then sent me on a quest to find figures to represent the kids too.

A little while after that, my friend Michele sent us some wonderful baby gifts and just happened to stick that little Kewpie doll on the outside of the package, and I practically bolted out to the car to stick it in its place. All I needed were the boys and after several failed attempts to find the Blockheads from Gumby in an appropriate size, I settled on Mario and Luigi. Even though I am not a gamer, the boys love them, so that's that.

And now, every time we get in the car we have to smile at our little dashboard family up there. :)

Also cute was this terrified leaf friend that John found outside the other day:

I am going to attempt to pickle some things this week. I have dabbled in canning in the past, but not much, and I have never pickled, so this might prove to be horrible. Or not. We'll see.

I mixed coriander, allspice, cloves, turmeric, celery seed, yellow mustard seeds, bay leaves, cinnamon sticks, and mixed peppercorns in there and it smells quite delightful. I have a bunch of dill in the freezer and must grab some garlic, and then I can do half batches of each item in spice blend thinger and also in garlicky dill.

Believe it or not, I could keep talking indefinitely, but I have decided to cut myself off here. Cross your fingers for cooler weather so I can get up in the attic really soon and have a real project to share again!

Comments Off on Everything again?