Ramble had SUCH a good time at Rhinebeck (aka the NY Sheep and Wool Festival).

He got to meet Bob at the Ravelry meet-up.

He congratulated two of my favorite newlyweds, Jessalu and RR. (I couldn’t find my other friend Jessica who was married the week before, but he’s happy for them, too.)

I think the highlight of his day, though, was the Juniper Moon Farm meeting at 2:00. (Thanks to Susan for letting me use her picture.)

He came home with us afterward, too tired to even think of getting in his box and moving to the next person without a good night’s sleep under his fleece. We couldn’t blame him–Mom and I were pretty exhausted, too.

Here are a couple more, pretty bad (sorry) photos I surreptitiously snapped during the JMF meet-up. Apologies for the quality, but, well…

This one of him modelling his new pin.

Comments Off on Rhinebeck!

Posted on October 15, 2010 by Lisa | Comments Off on Movie Time!
Bad blogger, bad bad! BUT here is a video of the ladies very excited 'cause maybe I will feed them some treats!

Comments Off on Movie Time!

So, after catching us all up on his travels, Ramble got ready for yet another adventure–going back to his roots!

His Martha’s Vineyard roots, that is. He was born there 26 years ago, and hasn’t been back since.

On the way up to Massachusetts, we stopped in Mystic–roughly the halfway point in the drive, and a place for all of us to stretch our legs. We had an elegant lunch at our favorite fine restaurant while Ramble told us all about his LAST visit to Mystic.

Well, you know, it’s not like we could really have lived up to that one in the 45 minutes we were there, anyway. Because, we had a ferry to catch!

Ramble was SO excited to be on the ferry–he climbed right up front and perched on the dashboard, so he would be the first to see the island.

We docked in Oak Bluffs–the first time I’ve landed there in years (since that wharf is only open during the peak season).

Naturally, we took him up to the Aquinnah (formerly Gay Head) cliffs for the requisite “I was here” photo.

The cliffs were gorgeous as always, even if they have lost a lot of their red clay coloring.

Ramble also insisted on posing with the Historic Site sign.

In fact, Ramble and my dog Chappy became fast friends during the trip, happily sharing the backseat together. (Though the friendship might not have lasted if Chappy actually had thrown up on him on Monday–luckily I grabbed Ramble and his travel bag out of the way in time. This is the problem with travelling with a dog with carsick tendencies.)

It’s good that they became so close, though, because Chappy was there to comfort Ramble when they visited his old store.

We explained that it HAS been 26 years, and things change. Ramble understood, but it still made him a little sad, knowing that his old home had changed so much.

On the plus side, he made a new friend.

This is Kate Taylor a great singer (it runs in her family) and a talented jewelry maker. She is one of the nicest people you ever want to meet. (Her daughter Liz is delightful, too–a Twitter friend of mine from well before I knew that she was Kate’s daughter, which I find an entertaining irony. I was delighted that we had a chance to see her, too.) Anyway, when Kate heard about Ramble, she said she absolutely wanted to meet him, too.

In fact, she gave him his newest souvenir–a gold pin.

The short story behind the pin? She was talking to a friend about a mutual acquaintance and said, “Isn’t he the goodest person?” “No, you are the goodest person I know.” “No, YOU are.” And they decided that they knew so many “goodest” people that they should just start an unofficial club. And that the club needed a pin, and what better for a pin than gold-leaf?

Well, apparently, Kate thinks that Ramble is the goodest sheep she knows.

I think that I have to agree!

Comments Off on Martha’s Vineyard

Posted on October 14, 2010 by Grandmatutu | Comments Off on A good cause . . .
I was just about ready to put my laptop aside and get on with my day . . . I have a million things to do.  But sometimes that's easier said than done.  I had to check out just one more link.  I'm glad I did because I think this is a.d.o.r.a.b.l.e and for such a great cause.  And what bravery . . . I could NEVER do this--so I especially admire these lovely ladies.  Check out the Knotty Knitters 2011 Calendar, and be generous.  I can't think of a nicer way to spend $20.

Posted on October 12, 2010 by Grandmatutu | Comments Off on Every day is a new beginning . . .
Don't you love that about life?  Everyday we have the opportunity to start fresh.  Whether you're on a diet, gardening, reading a book, or have lost your way . . . tomorrow means you can start fresh again.  The garden sitting half finished is only waiting for you; the book you put down meaning to finish "tomorrow" is still open as though no time had passed at all, and your body will benefit from a good diet today as much as it would have yesterday if you'd only stayed on that diet.  All things are new again.

I've started keeping lists of things I need to do.  My schedule has become so crazy that even as little as I cook, sometimes the dishes get piled up; I vacuumed yesterday and thought I'd broken my Oreck because it was making crazy sounds (a quick look and pulling out big paper and tape pieces solved that); and poor Mac is looking pretty shaggy right about now (he needs his winter 'do and I just haven't had time to indulge him).

But I have been working on a new project close to my heart.  I've loved all things handmade since forever.  I've never not loved handmade things.  So the sensible thing to do, of course, is to get more love in my life by also making things for others.  So . . . I'm starting my own business--something I've wanted to do for many years.  I've been working like crazy to put together my web site, my merchandise, my business cards, my style.  And it's coming together.

My first project unveiling will be project bags.  I love using them and want to give others the opportunity to own what I believe is just the best project bag out there.  And they're beautiful.  Lots of linens, cute cottons, some pockets, some embroidery . . . just a little bit of everything.  But they're all beautiful.  I've already sold several to friends who are using them as gift bags (why didn't I think of that?).

So please bookmark my site at http://www.grandmatutudesigns.com/ and visit back very soon.  We're almost ready to unveil some beautiful things.
xoxo

Comments Off on Every day is a new beginning . . .

Why I didn’t have any covers this morning

Posted on October 9, 2010 by maltese parakeet | Comments Off on Why I didn’t have any covers this morning 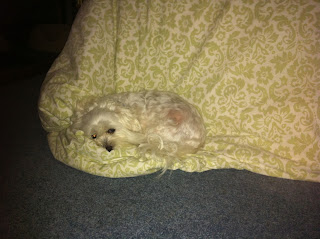 Posted on October 9, 2010 by maltese parakeet | Comments Off on Dog parrot 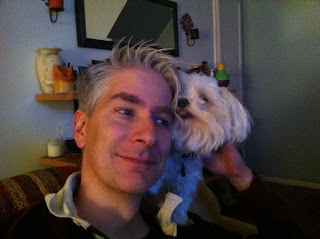 Comments Off on Dog parrot

Posted on October 9, 2010 by maltese parakeet | Comments Off on Dog parrot

Comments Off on Dog parrot

Would they remember him, Ramble wondered? It had been a year since he’d seen his family, and the address was completely unfamiliar. Maybe he had the wrong house?

Why, Chappy! How good to see you!

Comments Off on Hello?

Posted on October 5, 2010 by Grandmatutu | Comments Off on Soap . . .
Some people are lucky enough to become grandparents at a fairly young age--say 40 or 45, even 50.  I, however, was forced by inconsiderate children (they'll love reading that, I'm sure!!) to wait and wait and wait . . . I thought I'd never make it to grandparenthood.  My daughter was nearly 30 when she had that sweet little girl to your right!

So, when I tell you that I used to make soaps in my hippie days . . . oh so many years ago when I was oh so young . . . it won't surprise any of you, my fair readers, that it was something like 40 years ago that I made soaps.  Suffice it to say that a lot has changed in 40 years.

So, in all fairness, alas, I must call myself a soap making newbie again.  How lucky am I?  To have had the experience of making soaps with lard and lye so many years ago, and then to be reincarnated to now and making soaps with avocado oils, Shea butters, etc. is pretty cool, I must say.  What a difference!!

But I wish my generation had been a lot more green conscious when we were "growing up."  All this saving the environment, minimizing your carbon footprint, and tree hugging stuff is new to us oldies in the past ten years or so.  I, for one, am doing my best, but sometimes I slip up.  My slip ups are due to various things, but it's usually for one of two reasons:  laziness (sorry, sometimes I just get tired) or ignorance (some of this stuff I just can't imagine).

So imagine my horror when I determined that one of the products I've used in my recent soap making is a gross offender, environmentally.  Palm oil is a key ingredient in many of the soap recipes available these days.  Come to find out, it's a major, major source of deforestation and destruction of rain forests and thus contributes significantly to carbon dioxide emissions.  Eek!!!  I didn't learn this until I'd run out of the little bit of palm oil I'd purchased and began looking on the Internet at sources to replace it and for alternative products that can be successfully used in its place.

Now I understand that you can't believe everything you read--and everything on the Internet is not necessarily authoritative.  However, until I can do my own research on the subject, palm oil is O.U.T!!!  None of my soaps will contain palm oil in the future.  Certainly, I will honor the oil I've used and will use the products I've made with it--but I'll also honor the future by boycotting the use of it until further notice.  If and when I determine that palm oil is an acceptable ingredient environmentally, I'll begin to use it again.  But until then, it's curtains for palm oil!!

I'm going to be selling my soaps at the upcoming Share the Harvest Holiday Gift Market on October 16th at Jacob's Reward Farm.   My soaps are luxurious--sudsy and full of good oils, like avocado and jojoba, and I think you'll love them.  Hope you'll come and see all the pretty things we're getting ready for you!! 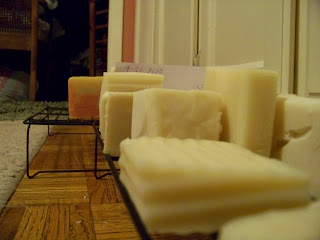